The Fluke 8050A Multimeter LCD Display Project replaces the display in my Fluke 8050A Desktop DMM with a TFT LCD bitmapped display.

The intent of the project is to replace the ancient 4½ digit LCD display on the Fluke 8050A multimeter with a 320x240 pixel color graphical LCD display. This just about perfectly fits within the cut-out in the front panel of the device where the old 4 digit LCD mounted in a bezel is present. The intent is to both display additional information (such as the mode of the meter - Volts, Amps, Ohms, etc) and larger and easier to read numerical display of the measured values.

The Fluke 8050A Theory of Operation page describes the Fluke 8050A and how that drives the requirements for the STM32F103 microcontroller used to drive the TFT LCD graphics display.

The general approach is that the microcontroller monitors the current option of the Fluke 8050A to render a graphical display on the 320x240 TFT LCD.

The basis of the extension used to drive the graphical LCD display is an STM32F103 microcontroller. In this implementation, I've chosen to use an inexpensive "Maple Mini" clone device which has an STM32F103CBT6 device on a small carrier board in a 40 pin DIP form factor.

Quite a few signals on the Fluke's 3870 microprocessor need to be connected to. Initially, I had contemplated simply soldering a number of small #30 AWG "wire-wrap" wire to socket pins on the bottom side of the Fluke PCB. However, this was a permanent modification, which I was trying to avoid. Further, I had purchased another cheap Fluke 8050A via EBay that had "some issues" (looks like some mechanical damage due to something heaving being dropped on it. While a little squirrely on on particular range, it worked well enough to serve as a development platform to avoid putting my working 8050A at risk. So being able to move the completed work easily from the development platform to another unit was desirable.

So instead a circuit was constructed on a small prototyping board. It included a 2 20 pin headers to accept the Maple Mini board, and a 40 pin "wire-wrap" style socket which has long pins. The 3870 CPU was removed from its socket, and the wire wrap socket pins are plugged into the Fluke's socket and the 3870 CPU inserted into the wire-wrap socket. This now provides easy access to all the signals on the Fluke's 3870 CPU (including Ground and -5V DC for power). 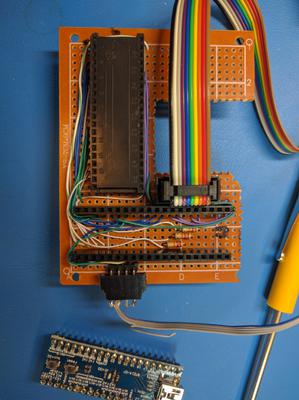 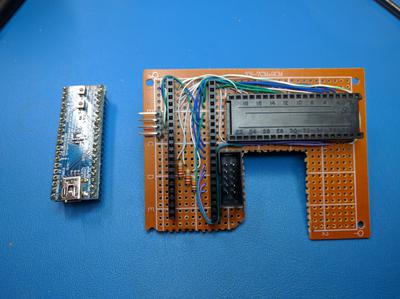 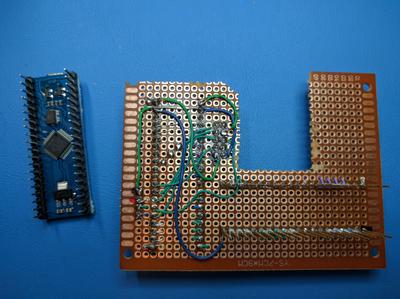 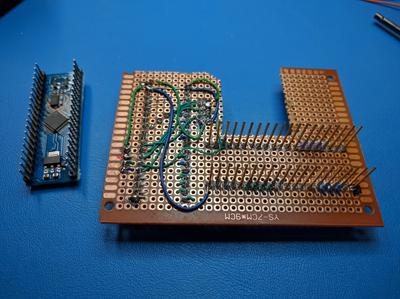 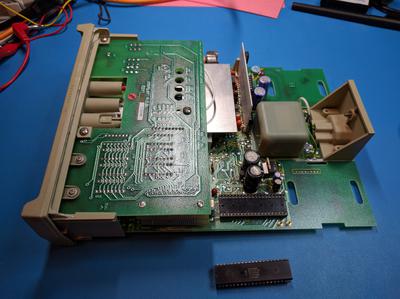 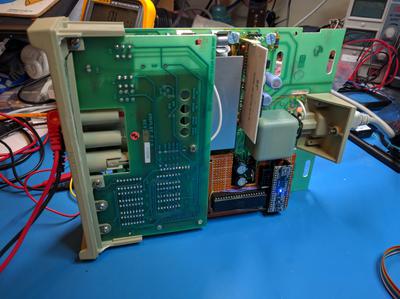 The STM32F103CBT6 microprocessor has some number of 5 volt tolerant I/O pins available, while primarily operating with 3.3 volt logic levels. As the logic in the Fluke 8050A is all at 5 volt levels, we utilize 5 volt tolerant GPIO pins quite extensively. Note that even with the 5v tolerant I/O pins, the STM32F103CBT6 data sheet recommends disabling pull-up and pull-down resistors in the specifications for the I/O pins:

Still, there are insufficient total 5 volt tolerant GPIO pins available, and there are still a few remaining signals to handle with "normal" GPIO pins. These remaining input signals to the F8 microprocessor are those connected to poles on panel switches used to determine what mode the meter is in. These switches are connected to input pins on the F8 and when closed connect the input ground. Internal F8 pull-ups allow these to float in a high state when the switch is open.

We will use a current limiting resistor in series with the STM32F103 input pin to limit the current drawn. While the pins in question are not 5 volt tolerant, the STM32F103CBT6 data sheet says:

Some other pages with reference information about the signal assignment from pins on the existing embedded "F8" CPU in the Fluke 8050A and the STM32F103 microcontroller. At some point, a real schematic should be constructed.